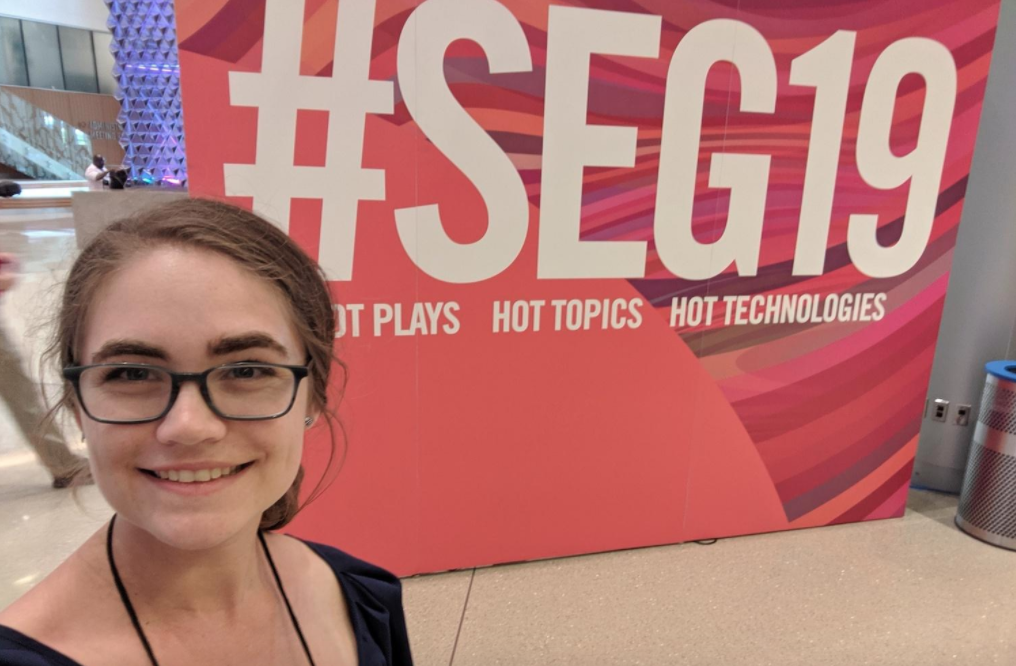 Georgia Stuart didn’t set out to be a mathematician. The Oden Institute’s new postdoc had every intention of becoming a high school mathematics teacher. But a chance encounter with some partial differential equations led her to her true calling.

Stuart began her mathematics degree at a community college in California in 2007. Soon after, she transferred to UT Dallas to complete her bachelor’s of science degree and her teaching certification in high school math and computer science.

It was during her next academic step, a Masters of Arts in Teaching (MAT) degree at UT Dallas, that Stuart took a course in numerical differential equations with one of her future advisors, Dr. Susan Minkoff. That summer Dr. Minkoff invited her to participate in a summer research experience. Stuart was hooked.

“During that summer, I learned how exciting and creative mathematics research can be,” said Stuart. “I decided I wanted a career with a research component, rather than focusing exclusively on teaching.”

Shortly after, Stuart finished her MAT and enrolled in the PhD program at UT Dallas, advised by Dr. Minkoff and Dr. Felipe Pereira. Her thesis? How to make more efficient algorithms, that require less computing power, for seismic inversion.

Seismic inversion is the process by which geophysicists and mathematicians can infer the structure and composition of what’s below the earth’s surface. Like an ultrasound, they use generated seismic waves to “see” the structure of the subsurface and locate desirable resources--such as oil and gas reservoirs. However, methods that solve for a picture of the subsurface and that also give uncertainty information (like “error bars” on the earth picture) require vast computing resources on supercomputers.

Uncertainty information is critical because it tells scientists how confident they should be in the model at a particular location. If a region shows a promising reservoir, for example, but it has high uncertainty, it would be a gamble to drill in that region.

“It’s not an exaggeration to say that an MCMC algorithm for seismic inversion would take years on my desktop computer. A supercomputer, on the other hand, could reduce that time to a matter of weeks,” said Stuart.

Weeks on a supercomputer is still an enormous use of resources. Stuart’s PhD research focused on using approximations of the wave equation to reduce the amount of computing time necessary for a seismic inversion problem. In addition, the heavy use of HPC resources necessary for Stuart’s research sparked a keen interest in HPC methods, hardware, and workflows. Under the guidance of Dr. Christopher Simmons, former Deputy Director of the PECOS group at the Oden Institute and current Director of Cyberinfrastructure Researcher Support at UT Dallas, Stuart has spent considerable time learning best practices for programming and deploying code on HPC resources, like the Ganymede cluster at UT Dallas.

The cluster, built in 2018 from donated racks from Stampede1 at the Texas Advanced Computing Center (TACC), served as one host for Stuart’s PhD research experiments. The primary home for Stuart's considerable computing needs was the UT Dallas Seismology Group's HPC Optane cluster, funded by Dr. David Lumley, the Cecil and Ida Green Chair in Geophysics at UT Dallas, and Dr. Hejun Zhu, leader of the UTD Seismic Imaging Laboratory.

“I’m not sure what direction I want to take my career after my Oden Institute postdoc,” says Stuart, “but I’m sure it will involve HPC. I would love to have a career where I get to learn new areas of computational science and help other researchers with their HPC code and
deployment.”

In October 2020, Stuart joined the Oden Institute to work on another project that requires vast HPC resources: oil spill source location in the Computational Hydraulics Group with Dr. Clint Dawson. In oil spill source location, satellite images are used to pinpoint the source of an oil spill. However, satellite images are often difficult to interpret and can’t reveal the location of oil slicks if they are significantly below the surface of the water. Stuart is currently working on code to model how oil spills propagate in the ocean.

While Stuart’s days are focused on research, she maintains ties to her education and outreach roots. As a masters and PhD student, she directed the Women in Physics summer camps at UT Dallas for five years and led a STEM-focused Girl Scout troop.

Now, as a member of the new Diversity, Equity, Inclusion, and Outreach (DEIO) committee at the Oden Institute, she hopes to continue her work of promoting women and gender minorities in STEM at UT Austin.

“It is critical that we strengthen the pipeline for women and underrepresented gender and racial minorities entering STEM disciplines, starting at the K-12 level,” Stuart said.

It is critical that we strengthen the pipeline for women and underrepresented gender and racial minorities entering STEM disciplines, starting at the K-12 level.

We know that boys and girls participate equally in STEM at elementary level. Female participation begins to drop off in middle school, and continues its downward trajectory into high school and undergraduate level.

Stuart remains heavily involved in teacher outreach and preparation. At UT Dallas, she served as co-director of the UT Dallas WeTeach_CS Collaborative, a program aimed at preparing existing K-12 teachers, many of them women, to teach middle and high school computer science. In her personal time, she currently works as a computer science professional development specialist at the WeTeach_CS program from the Expanding Pathways in Computing (EPIC) group at TACC. In addition, Stuart continues to teach mathematics education classes for the Science and Mathematics Education department at UT Dallas, where she worked as a lecturer and teaching assistant during her Masters and PhD.

“A professor I admire once told me I had two parallel careers: mathematics research and K-12 education. I don’t necessarily agree. I believe the two frequently intersect.”

A professor I admire once told me I had two parallel careers: mathematics research and K-12 education. I don’t necessarily agree. I believe the two frequently intersect.

This is a critical point. The computational science community cannot remain strong without greater diversity, and the way to achieve that diversity is to create stronger connections between universities and K-12 classes.

“I hope to build a career where I can continue to impact K-12 students, teachers, computational science, and high-performance computing at the same time.”